The Sartorialist | Lunch for 25 Video 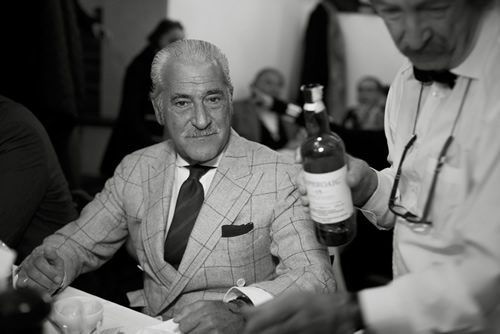 Earlier this month, Scott Schuman, most notably known as The Sartorialist, hosted a lunch at a small Trattoria in Florence. The setting was simple yet timeless, perfectly in line with the gentlemen that would be on hand. This would also be the set for the first video from a man that’s known for his effortless stills. The Inaugural Sartorialist Lunch took place during Pitti Uomo in Florence, Italy and will be a biannual event moving forward. Here’s how it all came to be:

About a year ago, Scott and I were sitting at a small Trattoria in Florence. The place looked amazing– not only the simple and traditional decor, but also the irreproducible Italian atmosphere and overall elegance of the gentlemen.

“Doesn’t this place look like the best fashion story ever?” I asked Scott.

“Yes!” He said, “Real, cool, diverse– It’s like if all the best dressed guys I know got together for lunch….. We should just do that! Get my favorite guys together in one room, it would be so much fun. These guys have so much in common and yet, for most of them, their paths never cross. Just imagine, someone like Gianluca, with his dreadlocks and modern-minimalist aesthetic sitting next to Lino, with his old-school Italian charm…. Mr. Kurino and Simone Righi discussing their first suit, Kanye and Terron talking about whatever it is those two super funny characters could dream up… I’m just guessing, but I bet these guys would really hit it off. What a great way to forge new friendships.”

“Scott… You should do it!!!” the idea sounded fantastic to me.

And that’s what Scott did. I can tell you, I was so jealous not to be in Florence for The Inaugural Sartorialist Lunch. But, here are a few photographs and a video to let you share the first of what we hope will become a biannual event that grows every year through a continually increasing diversity of style and deepening camaraderie between friends.

Video can be found below.