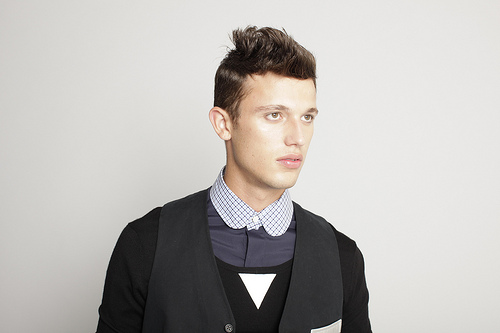 The son of Italian tailors, Antonio Azzuolo’s has done good by us from his first collection a few seasons back. Montreal-bred, with a degree in fashion, he’s had the privilege of designing for Ralph Lauren and working for Hermès in Paris. So what can you expect from the culture couture creator come Spring 2010? Immaculately constructed suits, traditionally detailed, and agreeably off-kilter. A smart three-piece, its jacket primly rope-shouldered, came in denim, of all fabrics (below). Will it play to the sticks? Well, I don’t know about that, but Azzuolo’s people did note that he’s gaining momentum (and stores) in Japan.”

More images after the jump. (via men.style)