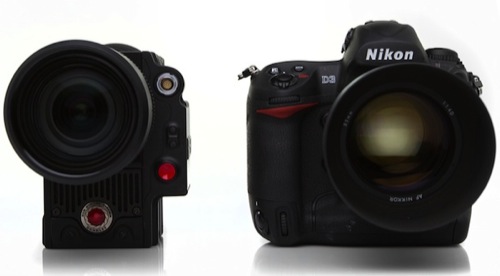 Anticipation for the perfect professional-grade camera has been building ever since the Red Scarlet 2/3 was initially announced about a year ago. An additional ASIC and four additional boards bring plenty of new features to light from the December 2008 announcement, maybe enough justification for the price-bump from $3,750 to $4,750. Scarlet starts with a 2/3-inch sensor in the $4,750 Scarlet 8X Fixed package (including “brain” and fixed 8x zoom lens, side CF module, REDmote, 2.8-inch touchscreen with “touch focus tracking,” REDVOLT battery, and travel charger) or $2,750 for the Scarlet Interchangeable which includes the brain-only with adapters available for electronic RED, Canon, and Nikon glass. The resulting cam shoots 3k REDCODE RAW video at 120fps (150fps burst mode) and scaled 720p or 1080p recording at 60fps. Expect both models to ship in May or June assuming nothing goes wrong with the ASIC or firmware.

More images after the jump. (via engadget) mophie and Supreme Team Up for Limited Powerstation Plus Mini Prev. article
David Bailey On Warhol to be Reissued on DVD by Network
Next article
Must-Read: The Official CIA Manual of Trickery and Deception [Spyology]
TOP