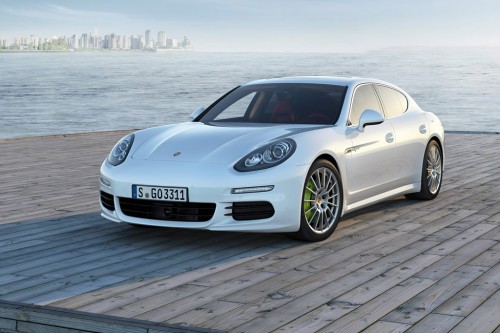 Porsche will officially take the covers off the 2014 Porsche Panamera at the Shanghai Motor Show later this month but here’s the scoop. The refreshed Panamera features subtle enhancements to the exterior like new LED lighting including full LED headlamps and slight adjustments to the rear. We were really excited to learn that Porsche will now offer a Panamera S E-hybrid model which features plug-in technology that builds on the Panamera S Hybrid from a few years back. A more powerful electric motor and higher-performance battery have been added, with recharge times being quoted at two and a half hours when plugged in to a 240-volt outlet. Charging as well as other vehicle data can be monitored via a new Porsche Car Connect app available for Android and iOS devices.

The E-Hybrid is said to have an all-electric driving range of over 20 miles and will be able to travel at speeds up to 84 miles per hour just on electric power. The Panamera S Hybrid is still a Porsche and it shows with the performance figures — 0-60 mph in 5.2 seconds with a top speed of 167 mph. Total output for the E-Hybrid is coming in at 416 horsepower and 435 lb-ft of torque when mated to an eight-speed Tiptronic S transmission. The S and and 4S models will be ditching their naturally aspirated V8 engines for new 3.0-liter twin-turbocharged V6 that delivers a boost in performance to 420 horses (up 20 from its predecessor) and 383 lb-ft of torque (up 15) and is mated to a seven-speed dual-clutch transmission.

Porsche has also announced that it will be offering extended-wheelbase versions of both the Panamera 4S and Turbo. Called the Executive models, these cars bring 5.9 inches of extra length in the wheelbase, and come standard with a range of much-welcomed features such as the German automaker’s adaptive air suspension with Porsche Active Suspension Management (PASM).