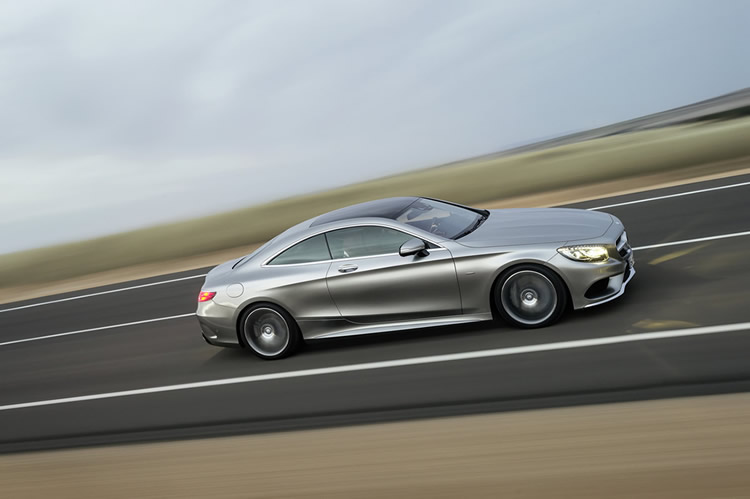 Mercedes-Benz unveiled an S-Class Coupe Concept five months back and looks like most of what we saw then is making into the production model 2015 Mercedes-Benz S-Class Coupe. With the CL-Class Benz now firmly out of the lineup, the S-Class takes its place and there’s only one version at launch. The S550 Coupe 4MATIC is powered by a 4.7-liter, twin-turbocharged V8 that dishes out 449 horsepower and 516 lb/ft. of torque and then mated to a seven-speed auto transmission.

The unveiling of the S-Class Coupe also marks a world premiere of the automaker’s “active curve tilting function”, which works with the Active Body Control system and its pair of front-mounted cameras. When the system detects an oncoming corner up to 49 feet away, it starts leaning the car up to 2.5 degrees over similar to a motorcycle to reduce lateral acceleration.

On the outside, all eyes are on the 198-inch long coupe’s aggressive front-end that features the further-evolved three-dimensional diamond radiator grille and full-LED headlights that are equipped with LED running light eyebrows. The dome-shaped stretched roof line and the frameless doors give the side profile of the S-Class Coupe a more refined and futuristic appeal. The car’s two-part rear bumper features a blacked-out diffusor that mends well with a horizontal wing in silver look right below it.

Inspiration comes directly from the S-Class sedan for the interior as you’ll see additional metal trim and the Bengal Red leather interior option. The infotainment system touchpad from the S65 AMG is standard here while the head-up display is optional. A standard panoramic sunroof exposes two-thirds of the interior and uses Mercedes’ Magic Sky Control technology to switch from transparent to opaque at the touch of a button. The 2015 Mercedes-Benz S-Class Coupe will be unveiled at the 2014 Geneva Motor Show on March 6th and go on sale in the US this fall.